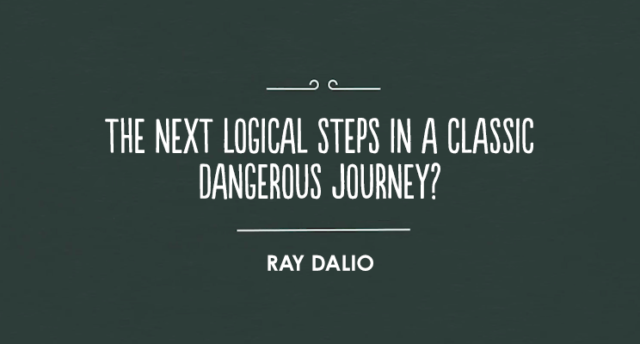 For perspective about what can be done and how it would be done, one can look at the US freezing of Japanese assets and embargoing of oil to Japan in the late 1930s to early ‘40s; they show how the use of special emergency powers gives the president the ability to do these things. Emergency powers today are most accessible to the president under the International Emergency Economic Powers Act of 1977 (IEEPA). It empowers the president to unilaterally impose capital and FX controls, freeze assets and/or payments on assets (coupons), and force asset divestures to “deal with any unusual and extraordinary threat” from outside the US to “the national security…economy of the United States.” Just the realization that these moves can be used has important implications for capital flows. For example, how would you feel if you were an adversarial foreign investor holding US bonds given this situation, given where US bond interest rates are and the impending deficits and monetizations of them? Of course, China dumping US bonds would have its own terrible consequences too. In any case, from not having to worry about such things in the past, now all market participants need to worry about them.

Regarding the technology war, we have seen the tip of the spear with Huawei, and we (Bridgewater) have given you an extensive look at the moves we can imagine could be done by both sides, so I won’t embellish more on them. As far as the geopolitical war is concerned, it’s a war of influence that is being fought in the classic Chinese way of quietly gaining strength and showing that strength to one’s opponent so that they realize that it is better to retreat than to fight. That is certainly happening in Asia and, to a lesser extent, in other parts of the world. Countries are increasingly having to choose whether they are aligned with the US or China. When presented with this choice, they typically answer it based on both economic and military calculations. Almost without exception, they say that the economics favors being aligned with China because China is more important to them economically (because China is bigger in trade and bigger in capital inflows) and that the military support favors the US if the US is willing to use it to support them, which is highly doubtful. At the same time, China’s own military capabilities (including cyber) are rising relative to the US’s, especially in Asia. As a result, China is for the most part quietly winning the geopolitical war, particular in Asia. As for what is likely to happen next, the big thing is the 2020 elections because that will determine who the players are; until then, actions and agreements are more for theater to play to the crowd than the real deal. After the elections, the real picture will emerge. Longer term, barring any big shocks, time is on China’s side as it is improving at a faster rate than the US, and the big question is whether the world will a) peacefully evolve toward two different spheres of influence, with China the dominant force in the East and the US the dominant force in West, or b) have more painful wars of their various types.

Under each of these three broad categories of influences, I have imagined a detailed sequence of events for how these dynamics will progress, based on how sequences of events have classically played out in the past and how it is logical they will play out nowadays. I do this so I can compare how events transpire relative to expectations. If they’re largely the same, I assume the sequence will continue as imagined, and if they’re different, I abandon my theory and recalibrate. To me, last week’s developments seemed like the most recent logical stepsin this classic dangerous journey that is analogous with that which occurred in the 1935-45 period.

What follows are four appendices. Appendix 1 provides a more detailed account of what actually happened, what can happen, and how it can happen pertaining to threats to curtail capital flows to China. Appendix 2 recounts the path to war in the late 1930s via excerpts from my book “Principles for Navigating Big Debt Crises” (available in pdf form here for free). Appendix 3 recounts various times monetary policies didn’t work because there was “pushing on a string” and provides the various Monetary Policy 3-type fiscal/monetary coordinations that occurred in the past. Appendix 4 provides the legal basis for capital controls and capturing the assets of foreign entities.

How Low Can Bond Yields Go? No Record Is Safe.

Cartoon of the Day: Gesundheit